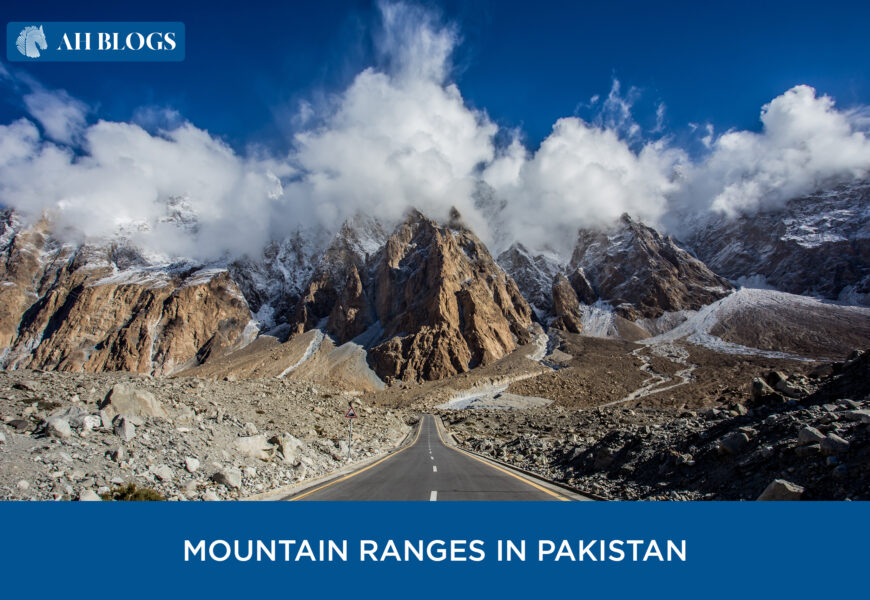 Pakistan is a country that is blessed with a lot of breathtaking desserts, beautiful lakes, scenic valleys, majestic mountain ranges and, hill stations in Pakistan. These are the reasons why tourists get attracted to Pakistan. For the last few years, the tourism industry has been growing fast. The reason behind this is antique history, natural beauty, diverse culture, and none other than the beauty of mountain ranges in Pakistan. If you love hiking, climbing on mountains, and trekking, for sure you might be looking for the list of mountains of Pakistan. There are almost more than a hundred mountain ranges in Pakistan that are 8,000 meters above in height.

How many mountain ranges in Pakistan?

Himalaya is also known as the western mountain range and owns the title of the world’s longest mountain range with a total height of 2,400 kilometers. This range across the five borders that are Pakistan, China, India, Bhutan, and Nepal. One of the most famous peaks of the Himalayas range is Killer Mountain also known as “Nanga Parbat” with a height of 8,126 meters (26,660 feet) over sea level. Nanga Parbat is also the ninth highest peak in the world. The Himalayas is also the home of Mount Everest (The highest peak in the world) that is located between the border of China and Nepal. The Western part of the Himalayas is located in Astore District in Gilgit Baltistan, Pakistan. There is an attraction point known as Deosai National Park for overnight camping, fishing, and hiking purposes. Himalayas Mountain Range is one of the largest mountain ranges on Pakistan map.

Karakoram Range is the second largest range in the world. It snuggles between three different borders including, Ladakh in India, Xinjiang in China, and Gilgit-Baltistan in Pakistan. Karakoram range has 50 plus peaks above 7000 meters. Karakoram Range is bounded on the Tibetan Plateau edge in the northeast to the Pamir Mountains in the north. The very first attempt at the climb to Karakoram Range was conducted in 1856. There are five different peaks in this range as this peak is named K2. This is one of the most liked mountain ranges in Pakistan among the mountaineer’s trekkers and hikers because of the lakes surrounded and scenic views. K2 is also known as ‘Savage Mountain’ because of its complex climb. Karakoram Range is one of the most engaging points on the map of mountain ranges in Pakistan.

The Hindu Kush Mountain was founded in 1830. The very first attempt at climbing was made in 1950 by Pakistani climbers known as the Norwegian team. This range is situated in the northwest of Pakistan and rises to the northwest of Pamirs. Hindu Kush range is more than 950 meters long and shares the borders of Pakistan and Afghanistan. It has the 7,690 meters highest peak known as Tirich Mir situated in Chitral. The second highest peak with a height of 7492 meters is Noshaq located at the Pak-Afghan border. Hindu Kush Mountain has various ranges. In Pakistan, it lies in Kohistan and Swat. Summertime is the best season to visit this scenic Hindu Kush Mountain. Hindu Kush mountain ranges in Pakistan map takes a big part in mountain ranges of the country.

The Sulaiman Mountain Range is situated in the north of Zabul province of Afghanistan and north of Balochistan province of Pakistan. It is an easily climbed range compared to mentioned above peaks but never loses its adventure. The most famous peak of the Sulaiman Mountain range is Takht-e-Sulaiman, also pronounced as ‘Sulaiman’s Throne’. It has a height of 3,487 meters (11,437 feet) over sea level. This range is ideally located in the Iranian Plateau and the Indus River.

Safed Koh Mountain is located at the border of Pakistan-Afghanistan. It is also called “The White Mountain Range”. It has a total height of 4,761 meters (15,620 feet). Sikaram Peak is the highest peak of this range. As the khyber pass and Shandur Top are close to the range, climbers and hikers love to visit the world’s highest Polo ground. During the Shandur Polo Festival, a lot of climbers, trekkers, and enthusiastic hikers visit the Polo Ground. In Pashto, this mountain is named “Spin Ghar”. The closest cities to this mountain range include Parachinar, Kurram District, Khyber Pakhtunkhwa Province of Pakistan, and in Afghanistan Jalalabad, Gardez, Paktia, and Khost.

The Hindu Raj is meant to be “Hindu rule”, it’s one of the famous mountain ranges in Pakistan located at the northern side between the two famous mountain ranges Hindu Kush and the Karakoram ranges. The Hindu Raj is some 500 miles (800 km) in length and 150 miles (240 km) in width. It lies between Northern Gilgit Baltistan and the Khyber Pakhtunkhwa province of Pakistan. According to Encyclopedia Britannica, “A wider definition of the Hindu Kush would include a fourth region known as Hindu Raj in Pakistan”. With a height of 6,872 m (22,546 ft) “Koyo Zom” is the highest peak of the Hindu raj range. Some other peaks (Buni Zom, Ghamubar Zom, and Gul Lasht Zom) of this range reach around 5,000 meters to 6,000 meters on average. Usually, its peak rises to 22,500 feet. With an elevation of 6,872 m (22,546 ft), Hindu Raj is one of the best mountain ranges in Pakistan map.

Kirthar Range is the boundary between Pakistan’s two provinces Balochistan and Sindh. The range lies somewhere about 190 mi (310 km) from the Mula River in Balochistan to Cape Monze (Karachi) to the Arabian Sea. This range covers a total area of 9,000 square kilometers. There are a lot of passes in this Kirthar Range but the only ones often used is the Gaji Lak Pass which lies from the road Zidi and Khuzdar to Jhalawan. There are 21 prehistoric sites within the stunning mountains of Pakistan. It is said, Taung Tombs of the 16th-18th century are also found in this mountain range. One of the highest peaks of the range is Zardak Peak at 7,430 ft (2,260 m). Talking about the second-highest peak of the range, here comes Barugh Hill at 7,056 ft (2,151 m). With an elevation of 2,260 m (7,410 ft), it has one of the beautiful mountains of Pakistan.

The Salt Range derives its name from large deposits of rock salt and is known as the richest salt field globally. It’s a hill station located in the province of Pakistan, Punjab. It has a total length of 186 miles (300 km) from east to west, and the total width is 5 to 19 miles in the central and eastern parts. Sakesar mountain, with a height of 4,992 feet (1,522 m) is the highest point of the salt range. This range consists of great salt mines including Khewra, Kalabagh, and Warcha, besides this medium quality coal, gypsum, and other minerals are also found in this range. The Salt Range continues onward south of the Potohar Plateau and north of the Jhelum River. Some of the famous lakes of the salt range include Khabeki Lake, Namal Lake, and Uchhali Lake.

Nanga Parbat is also known as “Diamer”, it’s globally the ninth-highest mountain with a total height of 8,126 meters (26,660 ft) above sea level. This range is located in the Diamer District of Gilgit-Baltistan, Pakistan. It’s situated at the western side of the Himalayas range, the northern side of Pakistan, and south of the Indus River in the Astore District. Locally it’s known as the “killer mountain”. The name is taken from the Sanskrit word ” nanga parvata” which means naked mountain. It covers a total area of 120 mi (190 km) in length and width covers 12 to 24 mi (19 to 39 km). It is one of the most famous mountain ranges in Pakistan for being the most difficult climb, and for more than 30 climbers perished. With an elevation of 8,126 m (26,660 ft), it gives a stunning view from Fairy Meadows located in Gilgit-Baltistan, Pakistan.

Ras Koh mountains are situated in Chagai District, the heart of the Balochistan province of Pakistan. The word Ras Koh is taken from the Balochi language where “Ras” meant to be “gateway” and “Koh” means “mountain”, putting them together means the Gateway to the Mountains. It’s one of the famous mountains of Pakistan, as, on 28 May 1998, Pakistan’s first nuclear test was carried out here. It lies in between the northern side of the Sulaiman Mountains and southwest of the lower Kirthar Mountains. Ras Koh hills had an average elevation of 600 meters, whereas in areas the elevation reaches up to 3,000 meters. Basically, its granite hills are part of the Sulaiman Mountain. The Ras Koh range is barren and without vegetation, therefore most of the people used to lead a nomadic life, raising sheep, goats, and camels. 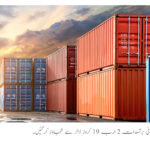 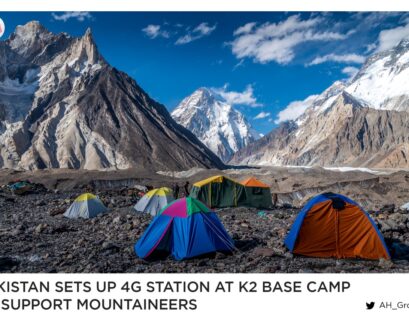 PTA and telecom operators are working jointly and honing in for better communication facilities to mountaineers and trekkers....